The La Crosse Public Education Foundation has a growing portfolio of endowed funds to support grant projects and other initiatives that sustain and strengthen teaching and learning in the School District of La Crosse. 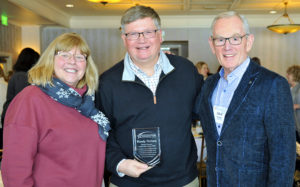 Now-retired Superintendent Randy Nelson, center, was a surprise recipient of a Richard Swantz Leadership Award at the January 2020 Grants Award Luncheon. Nelson and his wife Lynn, left, have established an endowment fund that will produce grants to encourage physical fitness, or servant leadership skills and character development. At the luncheon they were joined by Dave Skogen, right, chairman of Festival Foods, who presented the leadership award.

Richard Swantz Endowment Fund
The Richard Swantz Endowment Fund, named for the former superintendent of schools and one of LPEF’s founders, fosters teacher excellence by funding a grant each year in the area of staff development. Swantz, the longest serving superintendent of schools in La Crosse history and a co-founder of LPEF, died Oct. 15, 2019 at the age of 84.

Judy and Randy Eddy Sr. Fund
Established in 2012 by means of a generous gift from longtime La Crosse residents Randy Eddy and his wife, Judy, and supplemented with proceeds from the Randy Eddy Mathathon, this fund provides support to students and teachers in the La Crosse Schools with an emphasis on Logan High School.

McGavock Family Endowment for Music Education
The McGavock Family Endowment for Music Education provides annual funding for a program or project to enhance music education within the School District of La Crosse. The fund is named for Ronald and Philip McGavock. Ronnie was a professional entertainer who settled in La Crosse to raise a family. Philip was a music educator in his native Illinois.

Quarberg Family Pride of the North Side Endowment
This endowment is being funded through a multi-year gift by Brad and Gail Quarberg, whose children have attended Logan. The couple are devoted supporters of music and public education. Brad is a member of the Board of Education, and also serves on the LPEF Board. The fund awarded its first annual grant in February 2019. Annual funding will be split between the school marching band program and the school choir. This may include the purchase of instruments or music, or support student travel or show expenses.

Rachel Gundersen Endowment for the Arts & Humanities
The Rachel Gundersen Endowment for the Arts & Humanities provides annual funding for a grant related to theater, dance, music and visual art forms, or to support projects in literature, languages, global studies, geography, history, law or a host of other topics in the humanities. The endowment was established through a generous gift by Rachel Gundersen, a retired school psychologist and former president of the LPEF Board.

Claire E. Jandt Endowment for Library Media at Northside Elementary School
This endowment, created by a gift from Dennis Jandt in memory of his wife, Claire, supports a grant for the Library Media Center at Northside Elementary School and will be used to buy books, audiovisual resources, reference materials, or other instructional print or non-print resources to promote and instill the joy of reading among children. Claire Jandt was a library media specialist for more than 30 years at Franklin Elementary, a predecessor to Northside. 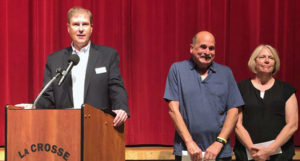 Randy and Lynn Nelson Endowment Fund
This endowment, created through a multi-year gift from Randy and Lynn Nelson, will generate annual grants to encourage physical fitness, or servant leadership skills and character development. Randy Nelson retired in June 2020 after nine years as superintendent of the School District of La Crosse. He served 12 years total in the District and 37 years as an educator. Lynn Nelson is a native of Westby and retired in 2018 after 35 years as a physical education teacher, most recently in Rochester, Minn. See a YouTube video here.

Tyser Power of Nature Fund
This endowment, created through a multi-year gift from Kathie and Rob Tyser, provides grants for students within the School District of La Crosse to experience the benefits of being in nature, including: field trips, co-curricular or after-school activities; fees to hire speakers or guides; or costs for students exploring nature-oriented career experiences. Added weight is given for some level of cost-sharing by the District, or proposals involving collaboration with other local nonprofits. While intended for student experiences, grants may be considered for staff development, or parent education, where the impact can be clearly demonstrated. Kathie is a retired associate superintendent of La Crosse schools. Rob is a retired professor of biology at UW-La Crosse. See a YouTube video here.

RAK Forever Fund
This endowment will generate annual income to support Random Acts of Kindness in La Crosse schools. For more than 20 years, LPEF has provided Random Acts of Kindness (RAK) funds to La Crosse public schools, allowing school staff to provide support discreetly to children in need, when they need it, with no questions asked and no application required. In one recent full school year, RAK met a student need more than 2,400 times, allowing children to stay focused on school and to just to enjoy being a kid. Across 15 schools, the total cost for the RAK program is nearly $30,000 per year, and spending has been increasing. An endowment campaign raised more than $415,000 for the fund and annual income will offset costs and provide stability to the program – forever.

Janet Kircher Isler Board Advised Fund
Funded in 2012 by a bequest from Janet Kircher Isler, a 1936 graduate of Central High School and a long-time teacher in Illinois, this fund supports special projects as directed by the Foundation’s board of directors.

Barbara Schroeder Board Advised Fund
Funded in 2014 by a bequest from Barbara Schroeder, a 1968 graduate of Central High School, this fund supports special projects as directed by the Foundation’s board of directors.

Several other funds have been established for the benefit of the La Crosse Public Education Foundation, including:

Steven and Julianna Blanchar Memorial Fund provides funding for Kindergarten field trips for all students in the district during their first year of school.

Sally A. Grimslid Memorial Fund provides extra funding for Northside Elementary School each year. The fund was established in memory of Sally, a former teacher at Franklin Elementary School, a predecessor to Northside.

Kids for Kids Fund, created with a donation from the Norman L. Gillette Sr. Family Fund, provides funding for dental and mental health services for schoolchildren in need.

Duane and Carol Taebel Fund provides annual support for LPEF with preference to activities for teachers and students at Spence Elementary School.

Please contact Executive Director Nell Saunders-Scott at 608-787-0226 or via email at nell@lacrosseeducationfoundation.org for further information about establishing an endowment fund or to discuss planned giving options supporting one of these funds, or a new endowment.