The McGavock Family Endowment for Music Education provides annual funding for a program or project to enhance music education within the School District of La Crosse.

Grant applications are accepted as part of the normal cycle for classroom grants. See complete instructions and download application forms on our Grant Applications page. 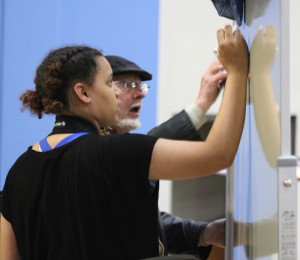 Pulitzer-prize winning composer Michael Colgrass works with a student on an original composition during a session at Logan Middle School in April 2016. Colgrass was a composer-in-residence for a week through a grant sponsored in part by the McGavock Family Endowment for Music Education.