Annika Dome, a sophomore at La Crosse Logan High School, has won first-place in a new essay contest designed to bring added meaning to studies of the Holocaust by connecting it with 21st century issues. 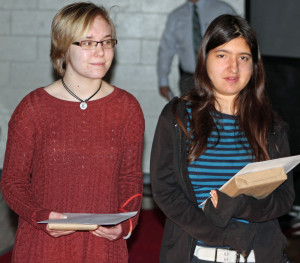 Two other Logan students – Lily Janezich and Isaiah Nelsen, both juniors – won honorable mention in the contest, sponsored by the Maureen and Robert Freedland Fund for Studies of the Shoah.

Annika was awarded the $250 first prize during the Academic Pep Rally April 21 at Logan High School. Her essay read in part:

Adolf Hitler is now one of the most infamous historical figures due to his intense fury that, by instilling fear in the minds of his citizens, came at the cost of genocide and other such unjust actions. One of the most important lessons of the Holocaust is to be on guard against intolerance and demagoguery.

The Maureen and Robert Freedland Fund is an endowment established at the La Crosse Community Foundation in 2007. Annual proceeds support grants awarded by the La Crosse Public Education Foundation to help students to advance their understanding of the Shoah, the systematic genocide against the Jewish people and other “undesirable” groups targeted for destruction by the Nazis in World War II. In addition to exposing students to the history of the Shoah, teachers are encouraged to help students to recognize the events and beliefs that made the Shoah possible and relate them to events around the world affecting people of many nationalities and religious beliefs. Essay contest prizes were provided through a separate gift from Maureen and Robert Freedland.

Annika Dome (left) is honored for her essay on the Holocaust and how it relates to current events. Presenting the award during an assembly at Logan High School is Maureen Freedland.

“Through the grants and new essay contest, we hope students will come to better understand lessons of the Holocaust that may apply today, including current racial, ethnic and religious persecution around the world or the refugee policies that are debated today,” said Maureen Freedland.

Find more information on our website about the Shoah Studies grants, or the essay contest, or contact the LPEF office at 787-0226.