Editor’s Note: Annika Dome, a sophomore at Logan High School, won first place in a new contest for her essay on how the lessons of the Holocaust connect with 21st century issues. (See story here on the award presentation.) The contest was sponsored by the Maureen and Robert Freedland Fund for Studies of the Shoah, an endowment that supports Holocaust study grants by the La Crosse Public Education Foundation. The opinions expressed are those of the author and do not necessarily reflect the views of the sponsors. 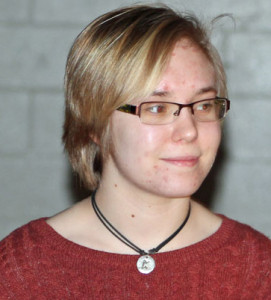 The year was 1933, and Germany was crumbling under the economic stress of hyperinflation. Adolf Hitler, a former soldier, set out to restore German pride, nationality, and culture as Chancellor of Germany. He manipulated public information with propaganda and brainwashed the defeated nation into committing unspeakable crimes against an entire religious population. By the end of World War II, more than 11 million people, including six million Jews, had been killed, including many in concentration camps across the European continent.

Adolf Hitler is now one of the most infamous historical figures due to his intense fury that, by instilling fear in the minds of his citizens, came at the cost of genocide and other such unjust actions. One of the most important lessons of the Holocaust is to be on guard against intolerance and demagoguery.  Unfortunately, the United States in 2016 is experiencing an atmosphere with leading politicians proposing to tighten the borders, enact massive deportations and bring acts upon America that would spread an increase of intolerance and prejudice.

Puritan John Winthrop once described America as a shining “city on a hill.”  He spoke those words as he traveled to the New World to set up his colony. Modern Americans embrace this concept of living as an example for the rest of the world to follow, yet America is repeating historical mistakes. In an ABC-Washington Post poll, 59 percent of Republican voters supported a ban on Muslims entering American borders. This display of a hostile attitude toward Muslims in the United States today echoes that of the German attitude toward Jews in the 1930s.

The media is used as a brainwashing device to imply all Muslims may pose a threat. This is an echo of an organization from the late 1930s in Nazi-controlled Germany, appropriately named the Propaganda Ministry of the Third Reich. By spreading misinformation of Jewish participation in corrupting society, Hitler spread his message of anti-Semitism, which lead to the genocide of Europe’s Jews. As Hitler manipulated the public, it became possible for Germans to view the Jews as inhuman, thus making it easier to eradicate their presence.  By using tools such as media and religious conflict, modern politicians gather support for their cause, similar to how Hitler was able to spread anti-Semitism by using the Propaganda Ministry.

In modern-day America, it is often implied in coded language that immigrants and people of different religions are a danger to American society and do not belong within American borders. Those who call to “make America great again” often harken back to a time when white, Christian men ruled society and people of other races and religions were considered lowly in comparison.

The concept of “good versus bad” immigrants has existed in the American nation since the dawn of its creation. Modern society faces a new group ofimmigrants: Hispanics and Muslims. However, the argument against the introduction of their presence in the nation remains the same as it has always been: that the immigrants will steal jobs from native-born Americans; that they will become a poverty-stricken community because of unemployment; and that these people will then turn to violence against the American public. The Jews were considered guilty of similar social crimes as the Hispanics and the Muslims are in today’s society. The Jews were accused of being the reason the Germans lost World War I, as well as responsible for the rapidly degrading economic structure of post-war Germany. While no American politician has proposed such an extreme plan as that of the Nazis, to eradicate the Hispanics and Muslims, there have been proposals of deporting those who are deemed unwelcome.

A major current issue in America is terrorism abroad. Citing the 2015 attacks on Paris, right-wing presidential candidates have focused on such radical concepts as containing America’s Muslim population. The echoes of the Third Reich are heard through these words. Politicians use the built-up resentment against Mexican and Muslim immigrants to accelerate the national outrage toward terrorist organizations to further their campaigns.

Ever since the fall of the Third Reich, society has promised that the mistakes during Hitler’s reign in Germany would never occur again, yet modern society seems to have forgotten as America stands in full readiness to repeat the exact mistakes from over 70 years ago. By slowly grooming the public attitude to anti-Islamic and anti-immigrant, modern American society is merely allowing itself to morph into the exact same puppet that Hitler was able to manipulate —  a puppet of fear, and a puppet of hate.