Posted on October 21, 2016 Categories: Grants, Longfellow Middle School Comments are off for this post 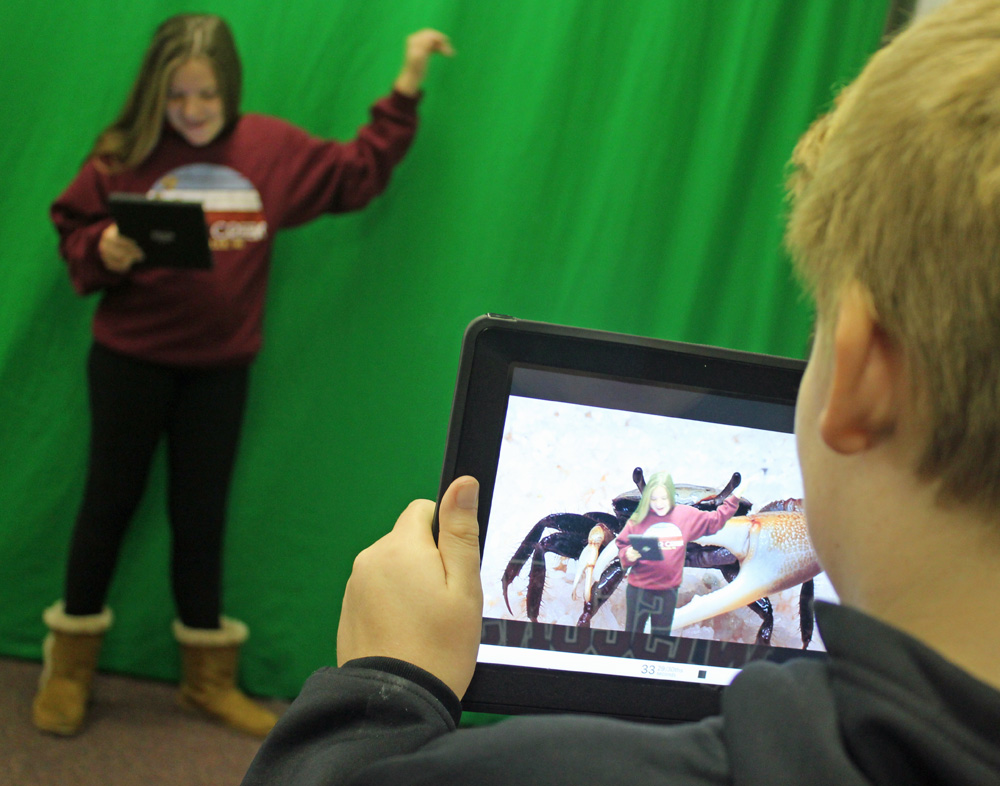 Marissa Pickar pretends to pet a fiddler crab while Eli Gardner films her in their newscast about the crustacean.

Let Lauren Finn introduce you to the magical world of the darkling bettle.

Or perhaps Nick Teff, Ava Blegen and Alex Weinberger can convince you that the hissing cockroach can be a “warm and fuzzy” creature suitable for a starring role in the Longfellow Middle School Insect Zoo.

If not, then surely Marissa Pickar and Eli Gardner will win you over to want to pet the fiddler crab that is starring in their newscast.

With the use of green-screen technology, purchased through a 2015-16 grant from the La Crosse Public Education Foundation, Longfellow students are using the photo and video capabilities of their iPads to adventure to far-away lands, create commercials and newscasts to persuade their classmates, and tell other stories in compelling new ways. 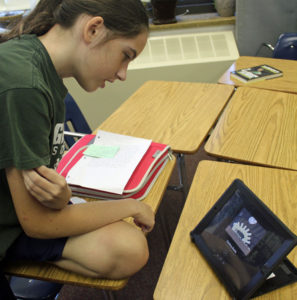 “Using the green screen, I’m able to give my fellow students a visual of what it looks like,” said Lauren Finn, a 7th-grade student who created her own animation and then used it as a background to talk about the fascinating darkling beetle.

If you watch television, you are very familiar with “green screen” technology because it is used in every telecast, particularly during the weather.

Through use of a common technology, the bright green color is isolated, and made transparent — allowing another image to show through. Technically, it can be done with other colors, but green is most often used because image sensors in digital cameras are most sensitive to that color — and because it is not a common color for people to wear, nor do many people have bright green eyes.

Jeanne Halderson, who teaches social studies and language arts at Longfellow, wrote the grant for the green screens to introduce her students to a new way to tell stories and explore the world. “Settings are a part of the exposition of the story,” she says.

“We’re meeting the kids where they’re at,” in the world of technology, says Halderson. “You can see this little buzz of excitement … there’s something magical about the green screens.” She says students working on assignments for other classes, and even for personal fun, often come to her classroom to ask to use the bright green curtain that hangs in the back of her room.

And, she says, it’s engaging for students at all learning levels. “It’s easy to use. It makes school more enjoyable,” Halderson says.

Elizabeth Ramsay, the Longfellow science teacher, finds the green screen “gives students another choice” for how to tell their stories. “Everyone can participate.” 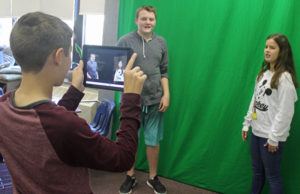 Alex Weinberger films with his iPad while Nick Teff and Ava Blegen try to convince viewers the hissing cockroach would be a “warm and fuzzy” addition to the insect zoo.

Ramsay has her students using the green screens to create presentations to show to the student body as part of a competition to decide which pets or insects to buy for a school zoo of sorts.

Marissa Pickar is using the green screen to take a set of stuffed animals on an adventure through the forest.

Nick Teff will have Legos explore the jungle and look for new animals.

Alex Weinberger is creating a forest story in which golf balls will be the main characters.

“They think of things I would have never come up with,” says Halderson. 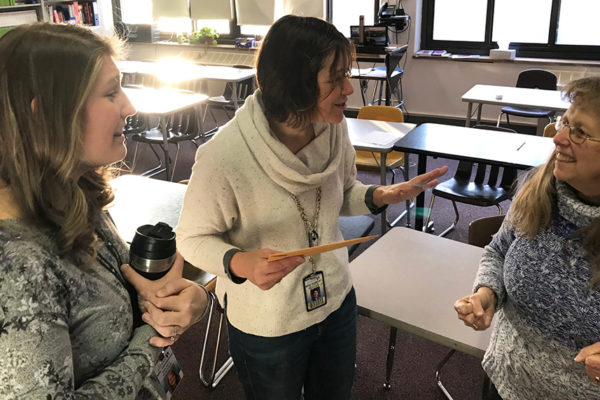