Chili Cook Off set Oct. 8 to benefit LPEF and D.A.R.E. 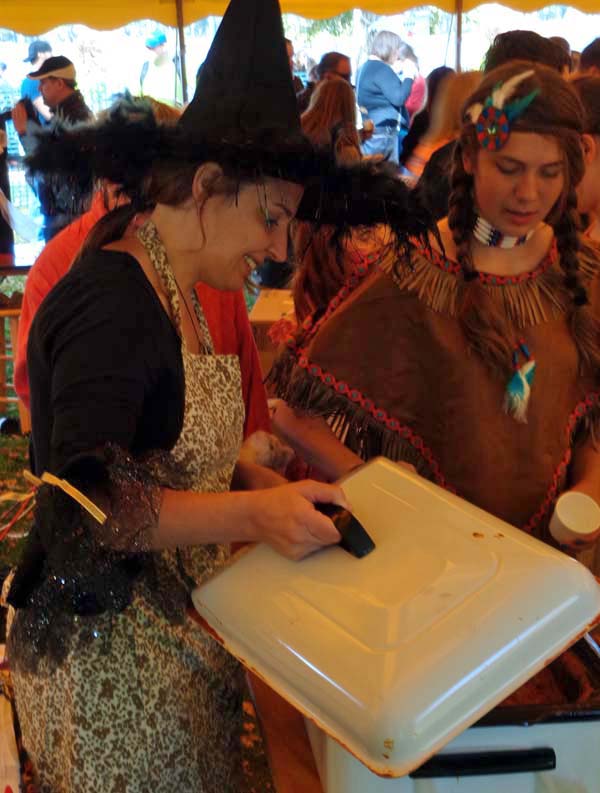 Stirring up her special “witches brew” for the 2015 Chili Cook Off was Sarah Schams, consumer education teacher at Longfellow Middle School. Sarah worked with her team of students to host a booth for the third consecutive year. LPEF contributed to help pay for ingredients for their chili.

Local schools stand to benefit — and hundreds of stomachs will enjoy the tasty and spicy varieties of chili — at the annual State Bank Financial Chili Cook Off to be held on Saturday, Oct. 8 at Riverside Park in La Crosse.

This is the 25th year of “heartburn and caring” for the Chili Cook Off. State Bank Financial has raised more than $250,000 for local charities during that time and is hoping this year’s event will be the biggest fundraiser ever.

A cook team of students from Longfellow Middle School, coached by consumer education teacher Sarah Schams, is a perennial contender in the People’s Choice voting — which is done by chili samplers who make donations into jars at each booth at the event. More than 20 teams of cooks are already registered, including a team from the School District of La Crosse School Nutrition Staff, which is being assisted by Board members of the La Crosse Public Education Foundation.

Admission to the event is $7 — plus attendees are encouraged to bring coins and cash to donate to their favorite chili-makers. In addition to the People’s Choice champion (the highest “vote-getter” in terms of cash collected during the event), an area chef will select a “Chef’s Choice” winner, and State Bank Financial CEO and President Tim Kotnour picks his “President’s Choice” champion. 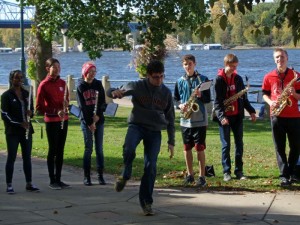 One of the saxophone players jumped out in front to dance during a 2015 Chili Cook Off performance by a band of students from Longfellow Middle School and Central High School.

Please come early for an 11 a.m. performance by Central High School band members, under the direction of Robert “Bix” Swerman and Nick Hansberry. Students will play some upbeat and fun music in a riverside performance prior to the opening of the gates for chili tasting.

Special thanks this year to two Chili Cook Off sponsors — Viterbo University and Brickl Bros — for providing additional support to the La Crosse Public Education Foundation.

See this report and photos from the 2015 Chili Cook Off.

See this report and photos from the 2014 Chili Cook Off.