Posted on October 16, 2014 Categories: Donors, Longfellow Middle School Comments are off for this post

For the second consecutive year, a team of students from La Crosse’s Longfellow Middle School won the People’s Choice award at the Chili Cook Off sponsored by State Bank Financial.

Throngs of chili-lovers descended on Riverside Park Oct. 11 to sample chili prepared by more than 20 teams. 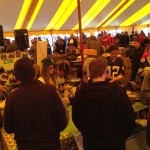 Longfellow consumer education teacher Sarah Schams worked with her students to prepare a traditional chili, served with cheese made fresh by the students.

LPEF is one of three organizations to benefit from the proceeds of the Chili Cook Off. Others are the local DARE and GREAT programs.

This was the 23rd year for the Chili Cook Off.