Carol Taebel has fond memories of her childhood years growing up in the Chicago area, and says she “had a wonderful 4th grade teacher” named Mrs. Kelly. “For years afterward, I wanted to be a 4th grade teacher.” 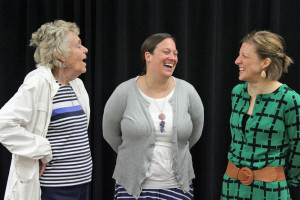 At the 2016 Thank a Teacher Day, Carol Taebel shares a fun moment with teachers Jocelyn Buxton and Summer Elston at North Woods.

After moving to La Crosse nearly 50 years ago, Carol fulfilled that dream and became an elementary school teacher, including 15 years at Harry Spence Elementary School in the School District of La Crosse. She taught 3rd, 4th and 5th grades, but she’s quick to say that teaching 4th grade was always her favorite.

“In 4th grade, they still love their teacher,” Carol says of her many students.

For the past four years, Carol has been supporting the annual Thank a Teacher Day event organized by the La Crosse Public Education Foundation. Baked goods and fresh fruit are delivered to nearly 1,000 district employees across 15 school buildings on that day, with funding via grant support from the La Crosse Community Foundation’s Carol and Duane Taebel Family Fund.

Now Carol has set up a new permanent designated fund at the La Crosse Community Foundation called the Carol Taebel “Thank a Teacher” Fund. It will generate an annual grant to the La Crosse Public Education Foundation to be used in supporting teacher appreciation activities, such as the annual Thank a Teacher Day held in early May to coincide with National Teacher Appreciation Week. 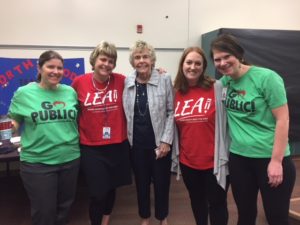 Carol Taebel and her daughter, Heidi Morris (second from left) at the 2018 Thank a Teacher Day event at North Woods, where Heidi is an English Language Learners teacher. Others in the photo are: Rebecca Misch, (Heidi and Carol), Tara Schuttenhelm and Kate Hooper.

“I think so much is expected out of teachers, more and more and more, and they get so little credit,” Carol says. “They are with kids all day long and I just needed to do something” to show appreciation for all school staff do on behalf of children.

Carol has been an inspiration and a volunteer contributor to many causes in the La Crosse community, including serving as Mrs. Oktoberfest in 1986. Two of her children are teachers. Her daughter, Heidi Morris, is an English Language Learners teacher at North Woods International School in La Crosse. Her son, David Taebel, teaches at Holmen Middle School. A third son, Scott, is an attorney in the Milwaukee area.

Carol and her husband, Duane, who passed away in 2005, moved to La Crosse when he became a gastroenterologist at Gundersen Health System. After substitute teaching for several years, Carol worked in La Crosse schools and retired after a total of 21 years teaching.

David Stoeffler, executive director of LPEF, says the new permanent fund ensures that the Foundation will be able to continue teacher appreciation efforts like the annual Thank a Teacher Day. “It’s a small gesture for those who give so much for our children, but we know the teachers and other school staff members appreciate the community recognition,” Stoeffler says. “Carol inspired this effort from its beginning, and we’re grateful for her permanent support.”