Posted on August 15, 2014 Categories: Donors, Innovation grants, Logan High School Comments are off for this post 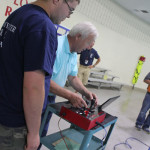 Randy Eddy, a former Riverfest Commodore, takes a turn at the helm. 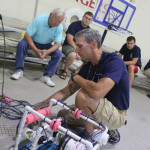 Randy Eddy asks questions as Steve Johnston explains the features of the ROV. 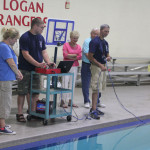 Pari Lukwitz is at the controls as Tanya Eddy, left, Judy and Randy Eddy and teacher Steve Johnston look on. 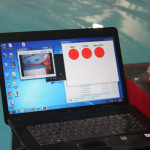 Dakota Thoren dives in to demonstrate the underwater camera on the ROV. 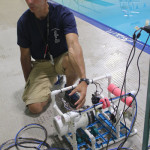 Steve Johnston explains the features of the ROV. 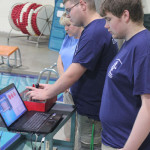 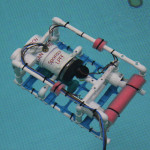 Students took pains to give credit to the La Crosse Public Education Foundation.

Judy and Randy Eddy Sr. recently had the chance to take a dip in the pool at Logan High School — well, more accurately, they spent an hour with students demonstrating the Logan Ranger Underwater Remote Operated Vehicle.

As reported July 19 in the La Crosse Tribune, three students proudly showed off the work of the Logan PLTW-Digital Electronics class under the direction of Steve Johnston, Logan technology education teacher.

The project was made possible by a $1,519.65 Classroom Innovation Grant from the La Crosse Public Education Foundation. That grant was underwritten by proceeds from the Judy and Randy Eddy Sr. Fund, with the grant made in memory of Chris Clements.  The Eddy Fund is one of several endowed funds operated by the foundation.