Posted on November 3, 2018 Categories: Community partnerships, Donors, Grants, LPEF Board of Directors, Randy Nelson Comments are off for this post 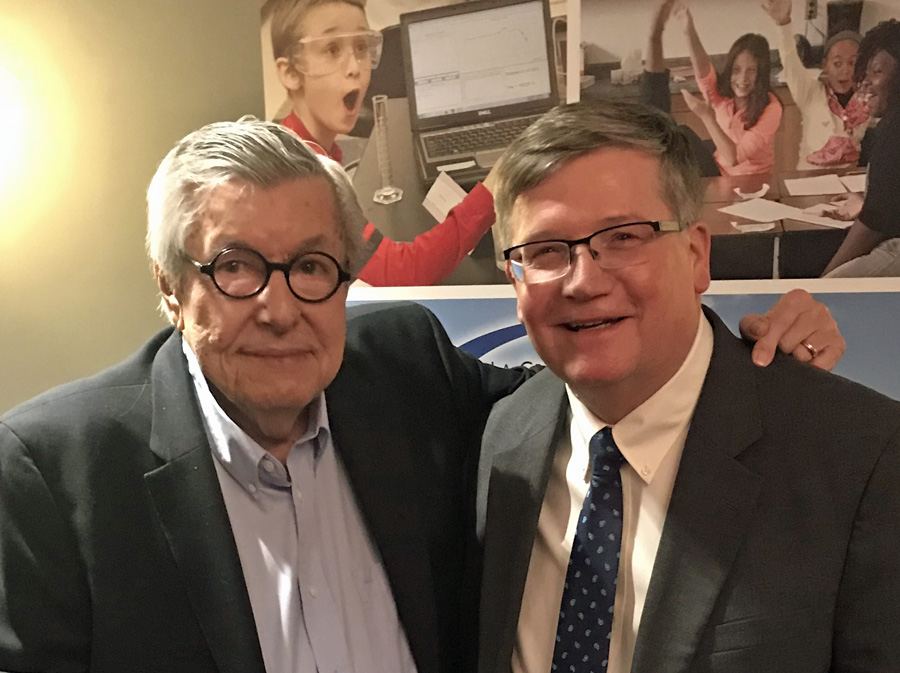 In that time, the Foundation has provided about 650 grants to teachers, students and community members working in our schools. The grants have touched every school and every program in the District, and totaled more than $725,000 —  including nearly $200,000 in just the past three years alone.

“Congratulations to the Public Education Foundation on 30 great years of supporting learning in our community, supporting public education, supporting our students, families and our staff,” said Superintendent of Schools Randy Nelson.

Nelson joined with former Superintendent of Schools Richard Swantz in leading a celebration at a Nov. 1 anniversary dinner held at the La Crosse Country Club. 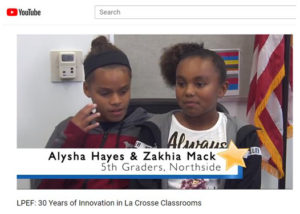 Over the years, grants have run the gamut from an “Animal Library” with live animals that could be checked out by any teacher to the purchase of cutting-edge technology (such as computer modems in 1992) to various programs to bring cultural diversity into our schools. See year-by-year grant highlights below.

Dirk Hunter, Summit Elementary principal and a recipient of a grant in 1988 as a teacher:  “When this first became available, my teaching partner and I, Tim Fladhammer, were both pretty excited about coming up with some type of project we could do with our kids.” Now projects funded at Summit “get kids excited about learning … Clearly, there’s no way we’d be able to fund the kinds of things that we’re doing right now without support from the La Crosse Public Education Foundation.”

Steve Johnston, Logan High Technology and Engineering Teacher, recipient of six grants: LPEF funding “has allowed me, at least professionally, to grow. There’s things that I would not have been able to do within my classroom due to the budget, that we can now do.”

Sondra LeGrand, retired Roosevelt and Longfellow teacher, who received seven grants: Applying for grants “was a huge opportunity for me. I was able to first of all see what a student needed and think about ‘what if?’ – What if I had a program that would read to this student? What if I had textbooks where the print was larger?”

Amoreena Rathke, Northside Elementary art teacher, recipient of seven grants: “I was using a lot of my own money (to do projects) … so I wrote a grant my second year in the District” and now apply every year. … My focus has been on providing different experiences for our students that they wouldn’t have opportunity to have otherwise.”

Shaundel Spivey, a cultural liaison with the District and also a leader of the community group, Black Leaders Acquiring Collective Knowledge, says LPEF grants provide an opportunity beyond what can be done with District funds: “A part of what we do as educators is we plant the seed, and then as students move along in life, they begin to kind of blossom.” 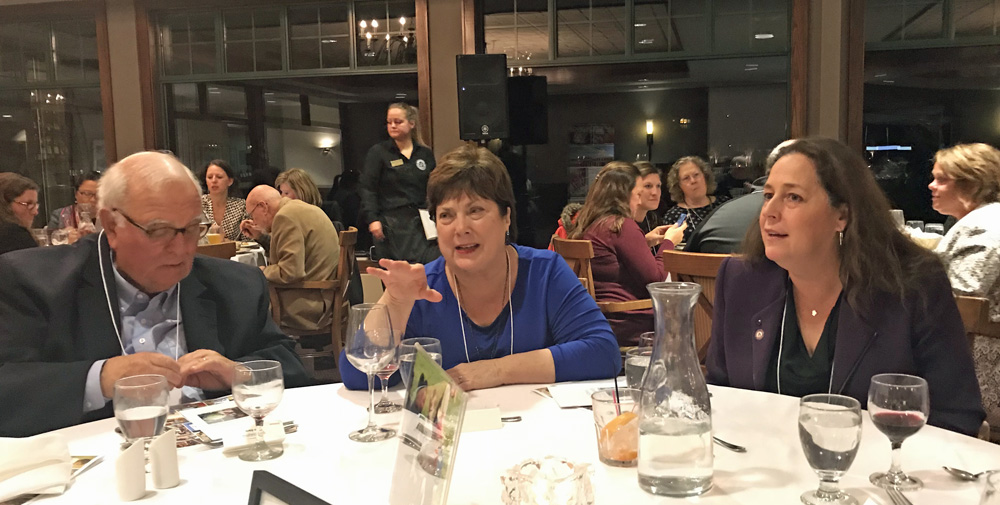 From left: Attorney Tom Sleik, who helped form the La Crosse Public Education Foundation and served on the initial Board, is joined by his wife, Judy Sleik, a retired teacher and former member of the LPEF Board; along with state Rep. Jill Billings of La Crosse.

1989 – Linda West (Central) – $432 to create an “Animal Library” with various live animals that could be checked out by other District teachers at any time during the course of the year. 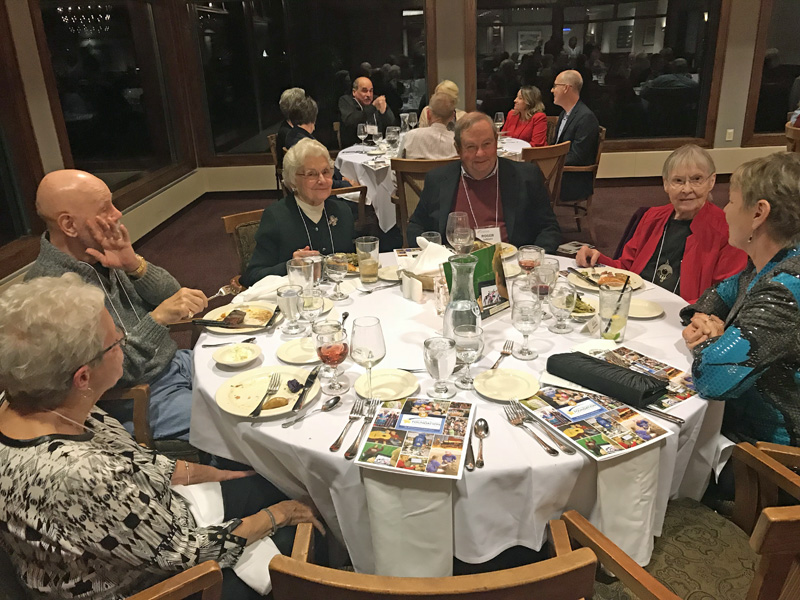 Enjoying good company and conversation at the 30th anniversary dinner were, clockwise from lower left: Marilyn Nieckarz, a member of the original LPEF Board;Ken French, a former member of the Board of Education; Susan Miller, wife of the late Dr. Charles Miller III, a co-founder of LPEF; Roger LeGrand, a current LPEF Board member; Rachel Gundersen, who joined the LPEF Board in its second year and later served as board president; and retired teacher Sonda LeGrand, who received seven LPEF grants during her work in La Crosse schools.

1992 – John Whitsett and David Whiteley (Central) – $596 for “Connecting With The World,” to provide equipment and telephone links so students have access to computer bulletin board services and cooperative databases used in science research.

1994 – Monica Lazere (Central) – $590 for “Success/Using The Best Sense,” to purchase audio textbooks for students whose learning style is auditory.

1997 – Jim Bagniewski (District) – $1,410 for “Math and Science Technology” to buy equipment to allow high school math and science students to work with real live data that they collect.

1999 – Daniel Lee and other teachers (Logan High) – $1,825 for “Shakespeare In The Park,” to construct a replica of the Globe Theater to be used as the centerpiece of a 3-day Elizabethan Festival.

2000 –Harvey Witzenburg (Jefferson) – $2,700 for “After School Program” to train Viterbo and UW-L students and have them spend time with elementary students after school to better meet the academic needs of the students.

2004 – Jim Bagniewski, Tom Kammer and Joe Anglehart (District) – $4,000 for “Using Handhelds in Science,” to purchase Personal Digital Assistants that work with software to allow students to collect real live data, graph it, print it out, and analyze the results.

2005 – Joseph Kuhn, Steve Bina and Brandon Holt (Central) – $1,750 for “Bringing Photography into the 21st Century” to buy digital cameras for the photography program.

2006 – Dawn Johns Swenson (Logan High) – $800 to help students develop relationship skills and process feelings, behaviors and patterns of communication by working with horses as part of a mentorship team.

2007 – Christopher Werner and Mark Lakmann – $2,000 for “Kim Archer Commissioning Project,” allowing students to interact with, play for and learn from Composer Kim Archer.

First Dr. Gunnar and Mary Baldwin Gundersen grant awarded to Richard Frost (Longfellow) for “Developing a Sense of Place,” to help students develop a stronger and deeper awareness of the land and rivers of our area through field studies, reading, writing, art and photography.

2009 – First Maureen and Robert Freedland Shoah Fund grant awarded – $433 for “Voices of the Holocaust,” for Logan Middle to buy material to help students understand the Holocaust.

Mai Chao Duddeck (Longfellow) – $1,550 for “The Bowl Throwing Project,” to help students “throw” bowls on pottery wheels and sell at a chili cook off.

2010 – Nick Kalina (Central) – $3,593 for “Robotics Initiative for Project Lead the Way,” for software and supplies for students to learn about robotics.

2011 – Susan Beauchamp (Central) – $8,000 for “One Community, One District, One Book,” to  purchase copies of the book, “Mockingbird,” and bring author Kathryn Erskine to La Crosse to  conduct workshops for students at Central and Logan, and for the community.

2013 — Steve Michaels (Hamilton) – $4,000 for “Enrichment Residencies for 45-15 School Intersessions,” giving students the opportunity to come to school for morning enrichment instructions while they are on school break.

2014 – Charles Schreader (Longfellow) – $6,255 for “Ultrasonic Cleaning Tool for Brass Instruments,” to purchase an Ultrasonic Cleaning System for the annual cleaning of brass instruments in the School District; project saves  money that can be used for other music programs.

Maggie McHugh and Garrett Zimmerman (La Crosse Design Institute) – $1,953 for “Zooming in on Science and Technology” to purchase microscopes to attach to iPads, allowing middle school students to conduct environmental research in the field.

2018 – Summer Elston (Emerson) and Jocelyn Buxton (Spence) – $6,480 for “Trauma Informed Self Care,” to send two teachers to a 4-day training program, allowing them to provide training to District staff on topics related to Trauma Informed Schools. 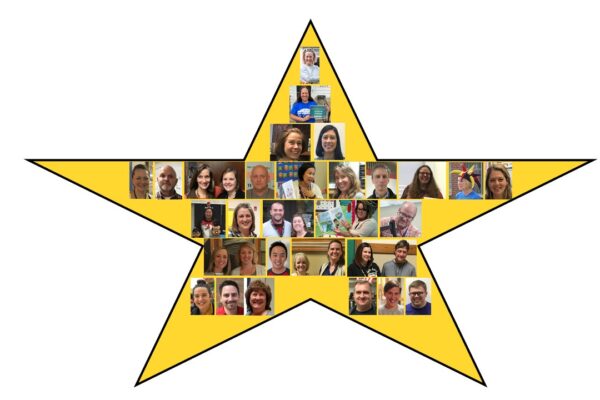 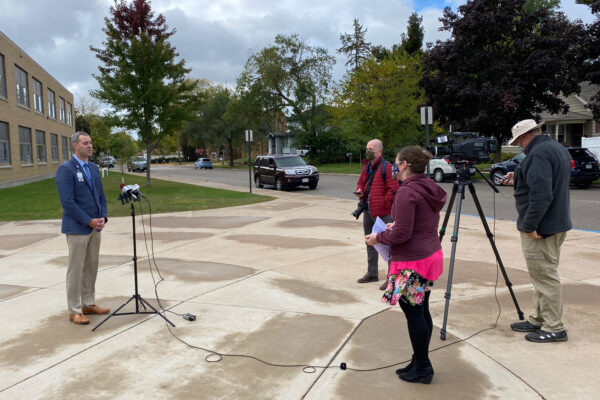 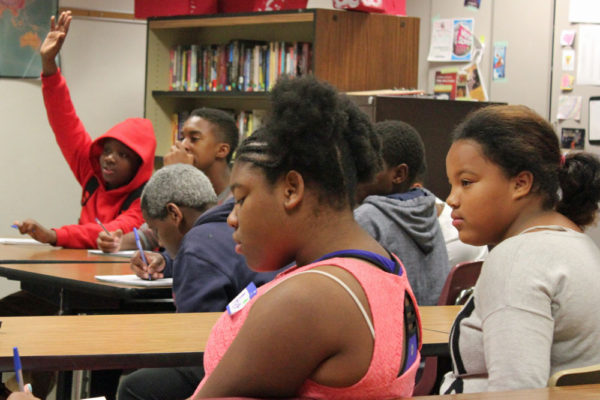