Read details about the 2019 Grants Award Luncheon at — https://lacrosseeducationfoundation.org/awarded-grants/

The Presenting Sponsor of the luncheon is Festival Foods.

Thanks to Nick Marcou, communications coordinator for the School District of La Crosse, for photography at the luncheon.

Kent Handel spoke to the crowd of his admiration for teachers. “Their jobs make mine look really easy.” 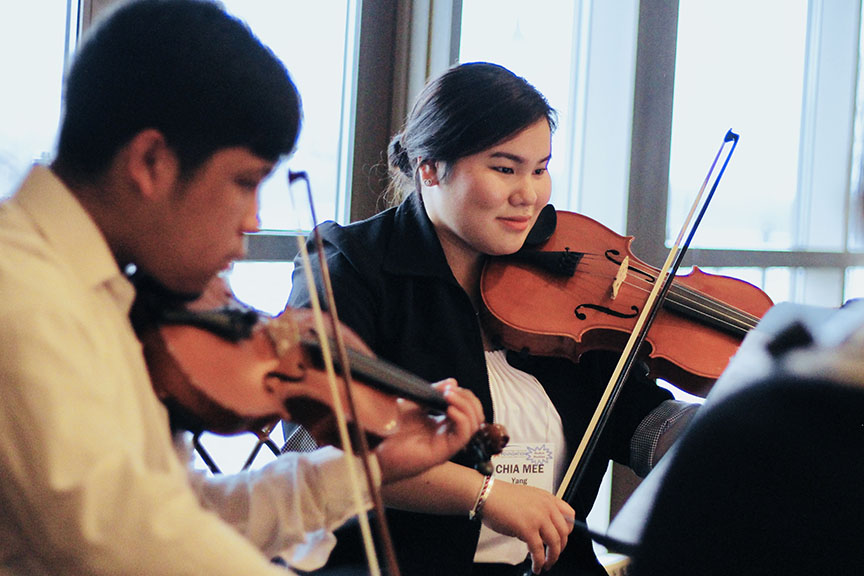 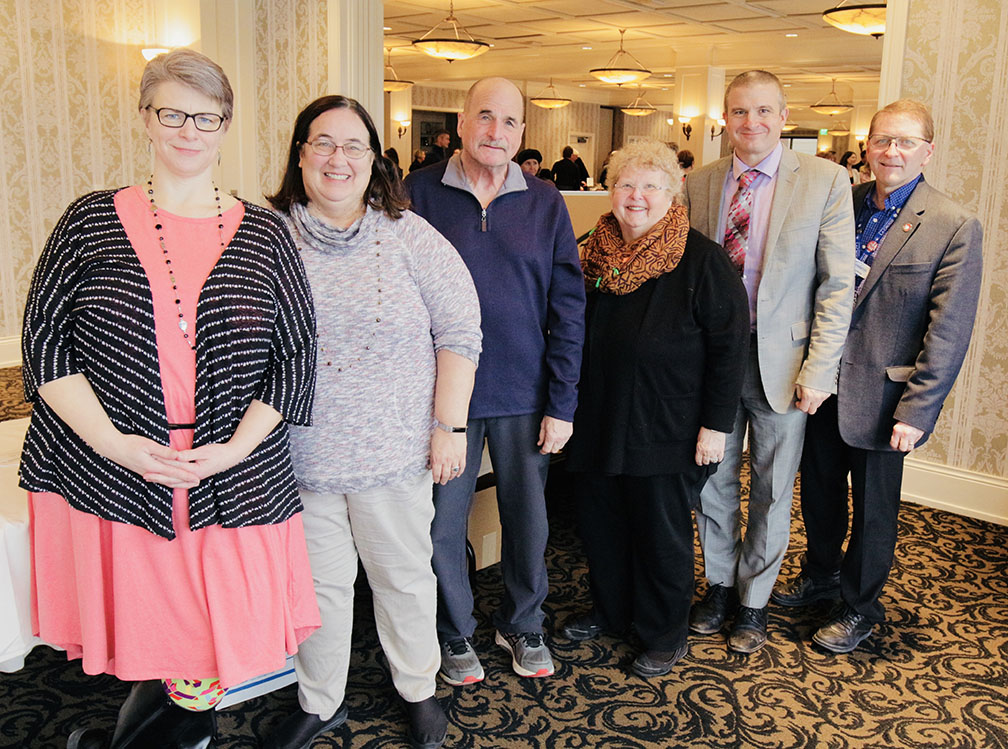 Members of the Board of Education helped celebrate the grant recipients and award winners. They are, from left: Dawn Comeau, Connie Troyanek, Tom Thompson, Mary Larson, Jeff Meyer and Brad Quarberg. 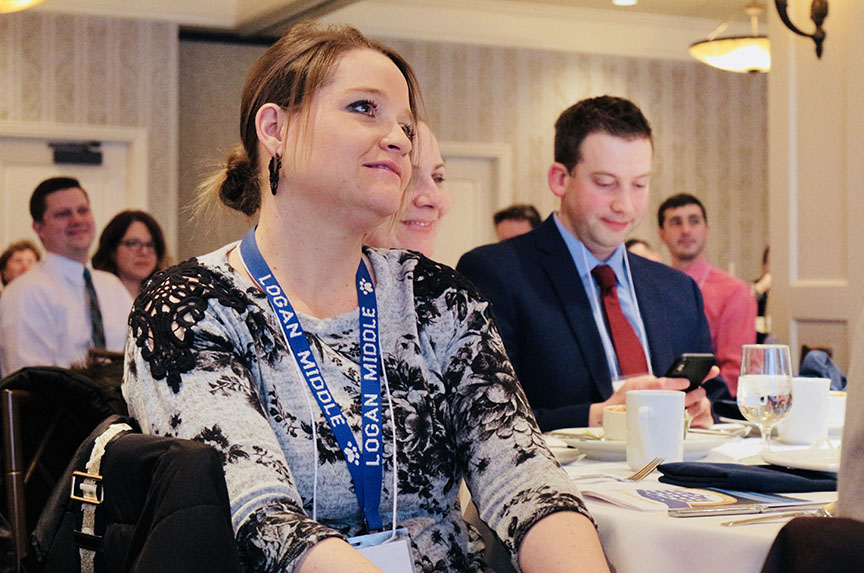 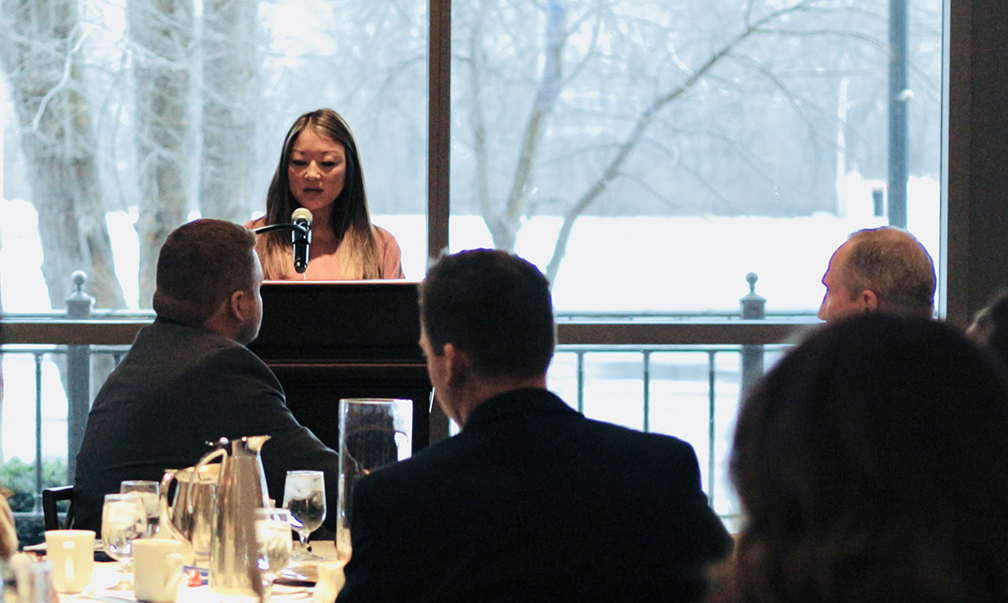 LPEF Board Vice President Anna Prinsen greeted the 270 guests for the luncheon. 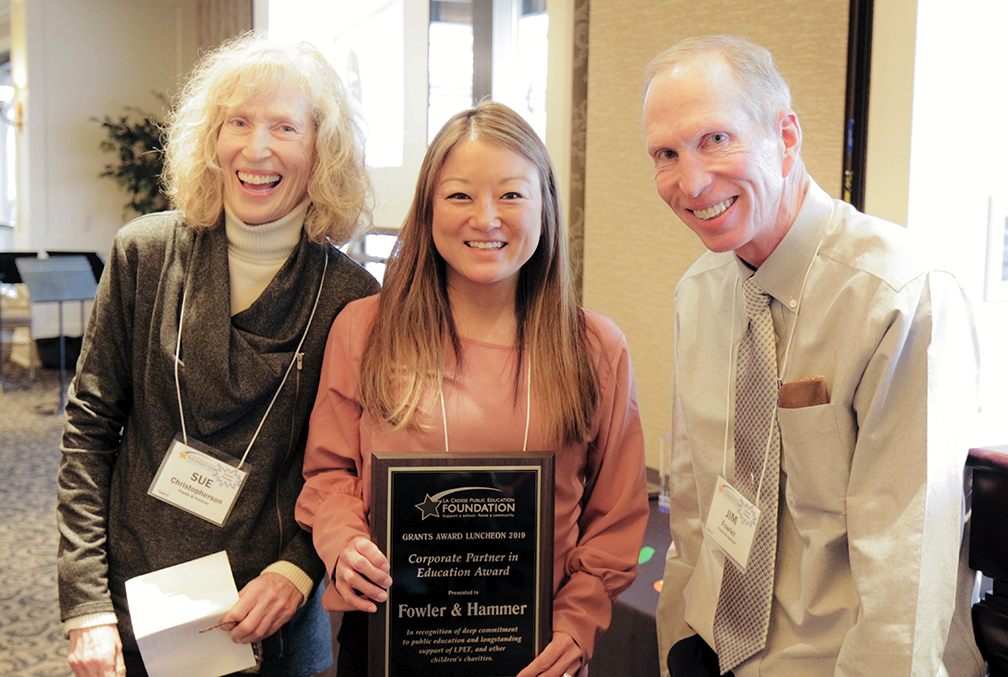 Anna Prinsen, center, vice president of the LPEF Board of Directors, presents the Corporate Partner in Education award to her mom, Sue Christopherson, and uncle, Jim Fowler. 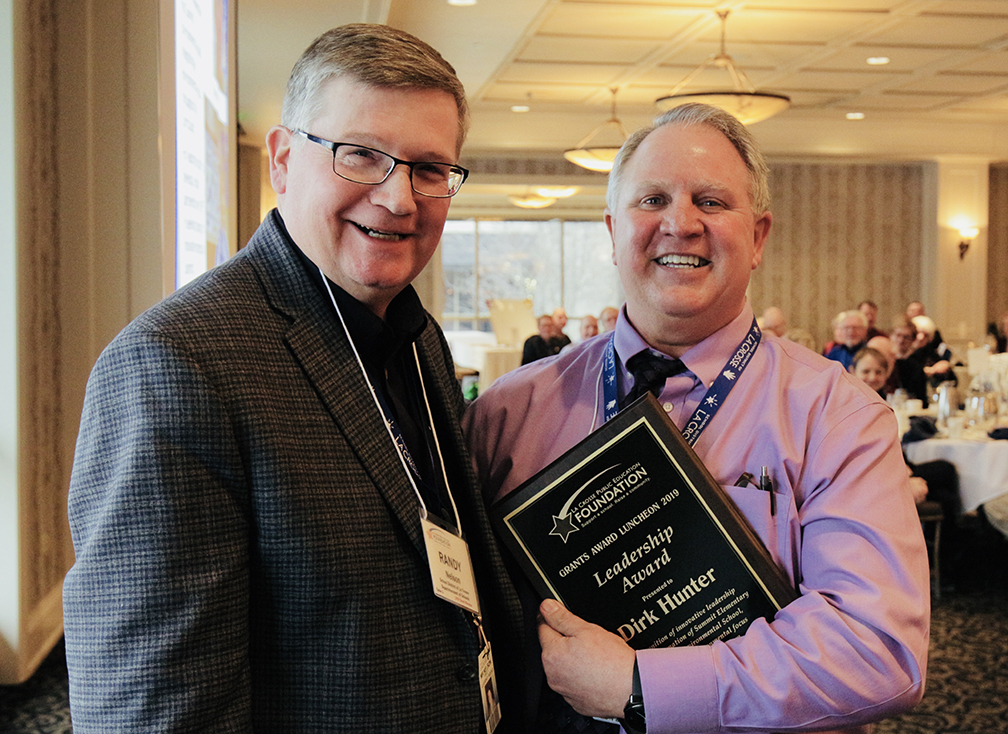 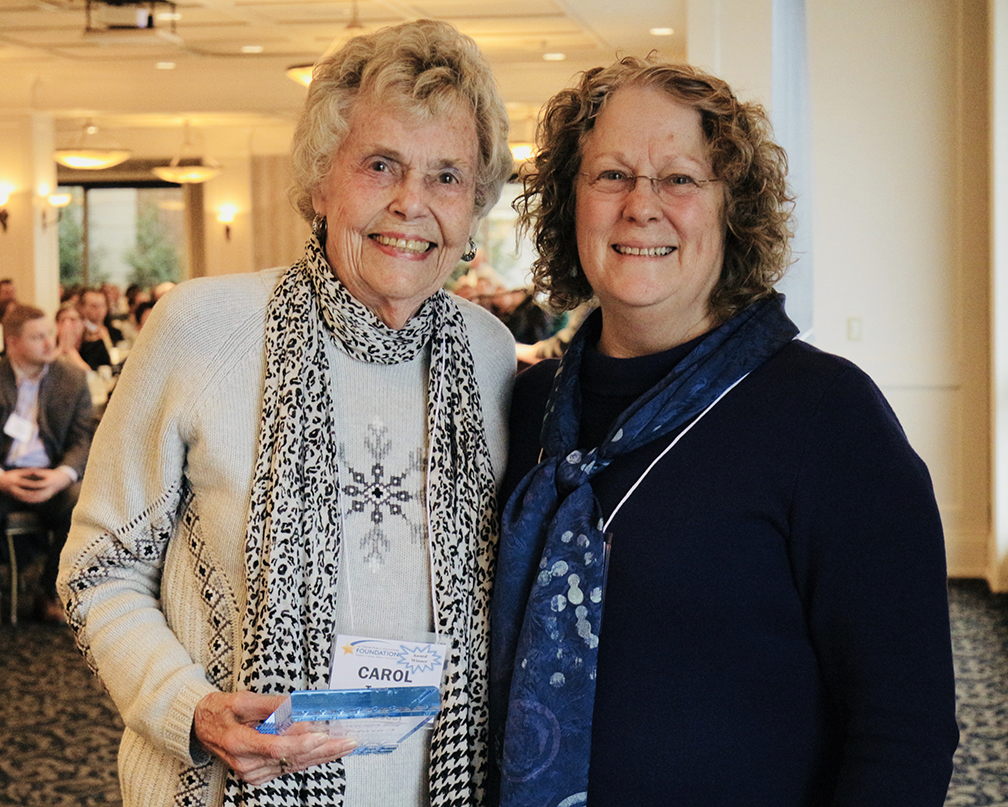 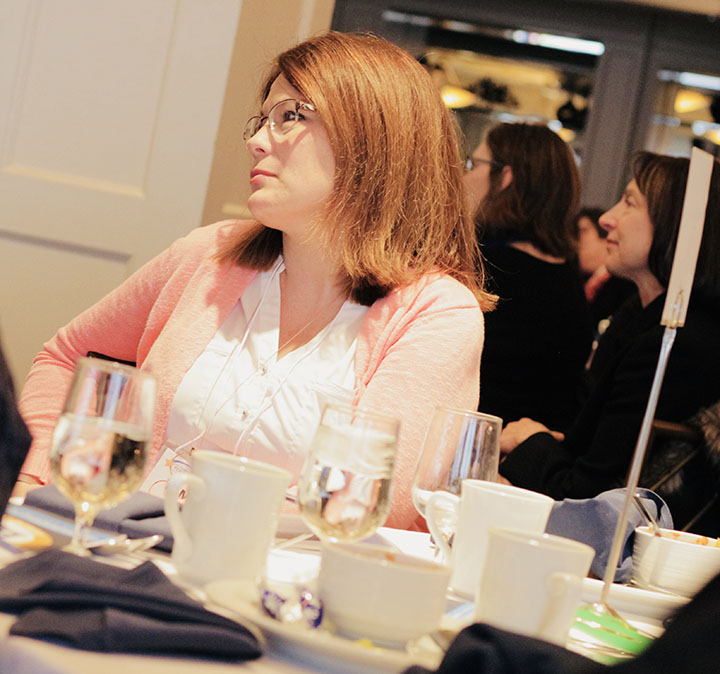 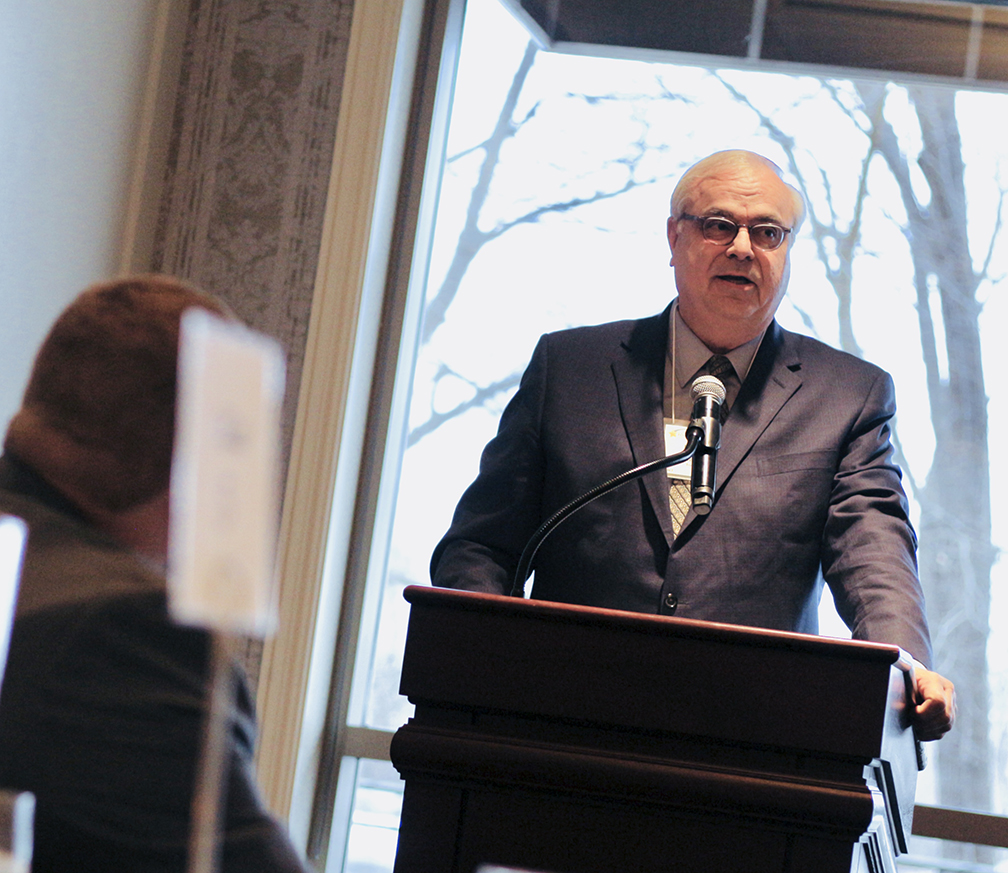 Kent Handel, president and CEO of Trust Point, was the featured speaker. While encouraging other businesses to get more involved in schools, Handel said: “School is a place where lives can be changed.” 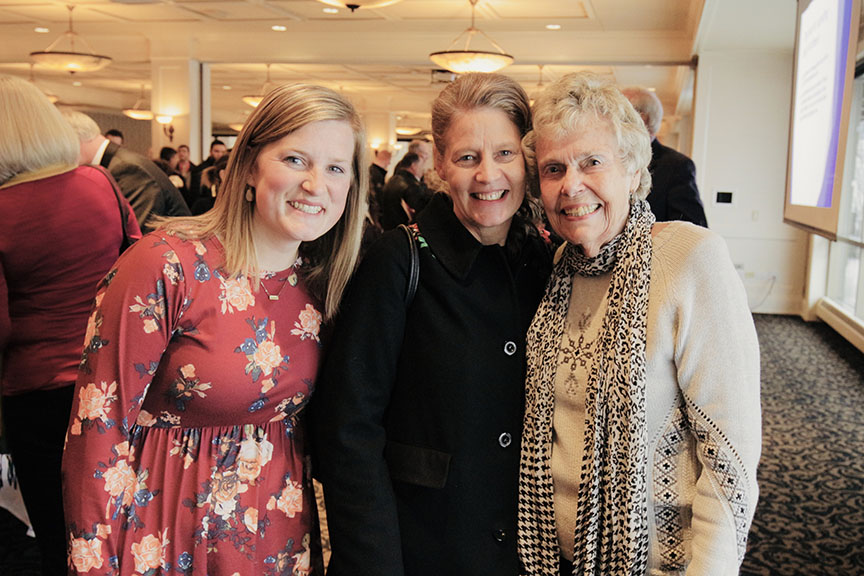 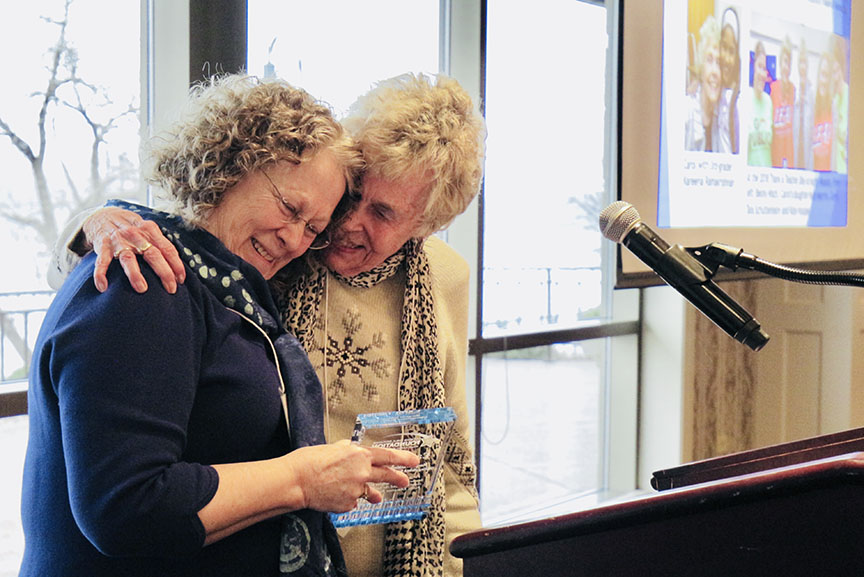 Margaret Dihlmann-Malzer, left, shares a moment with Carol Taebel as she presents the Distinguished Service Award. 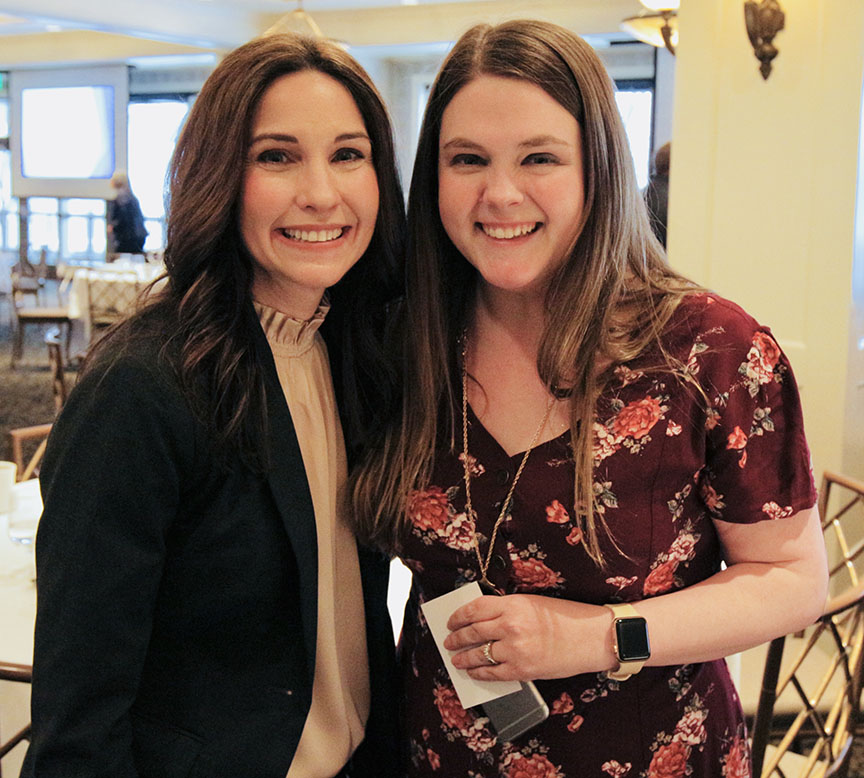 Lisa Klein from News 8 WKBT served as MC for the event. Here she is joined by Hamilton/SOTA I teacher Bethany Nugent, a member of the LPEF Board. 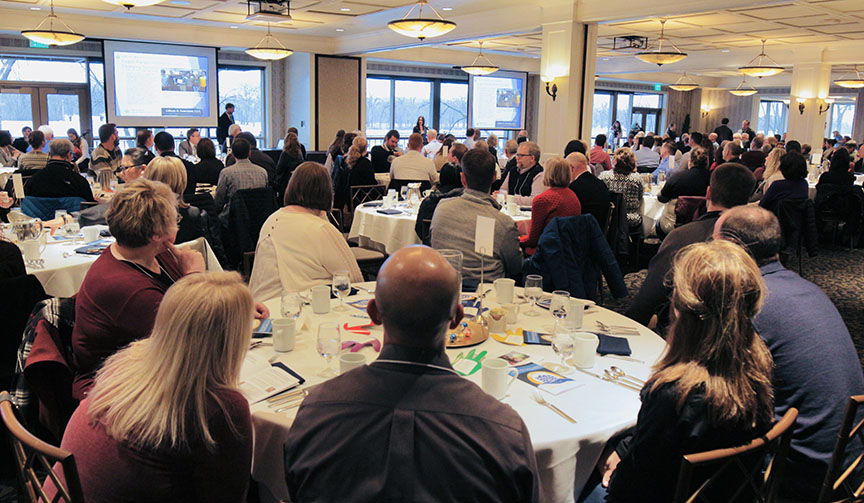 About 270 people attended the luncheon. 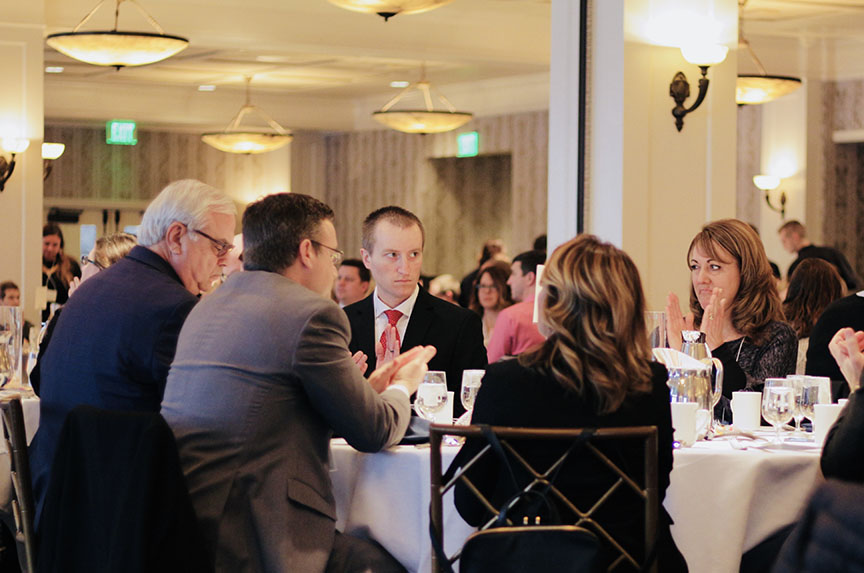 Dirk Hunter enjoyed a few laughs with hold friends who surprised him by attending the luncheon. 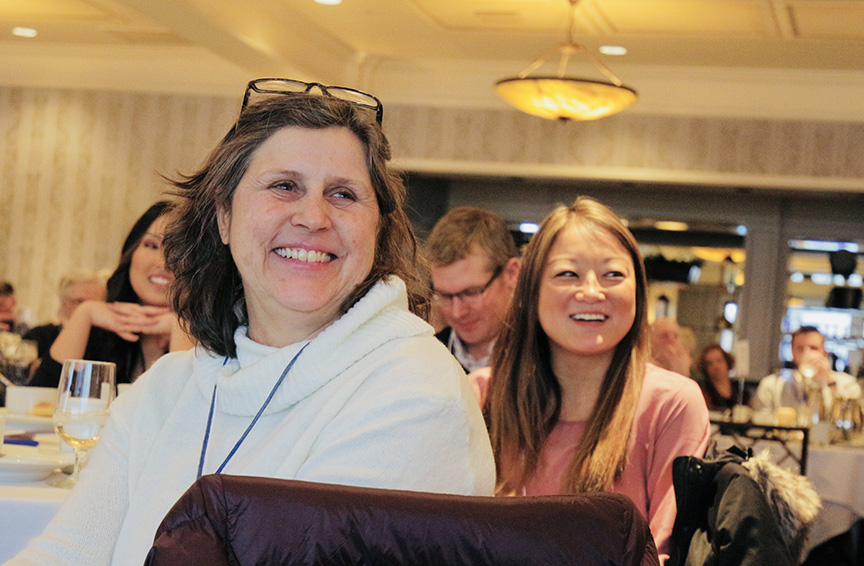 Summit teacher Debra Klaeser (front) received a grant for an archaeology project. The grant was underwritten in part by LHI. Also in the photo is LPEF Vice President Anna Prinsen. 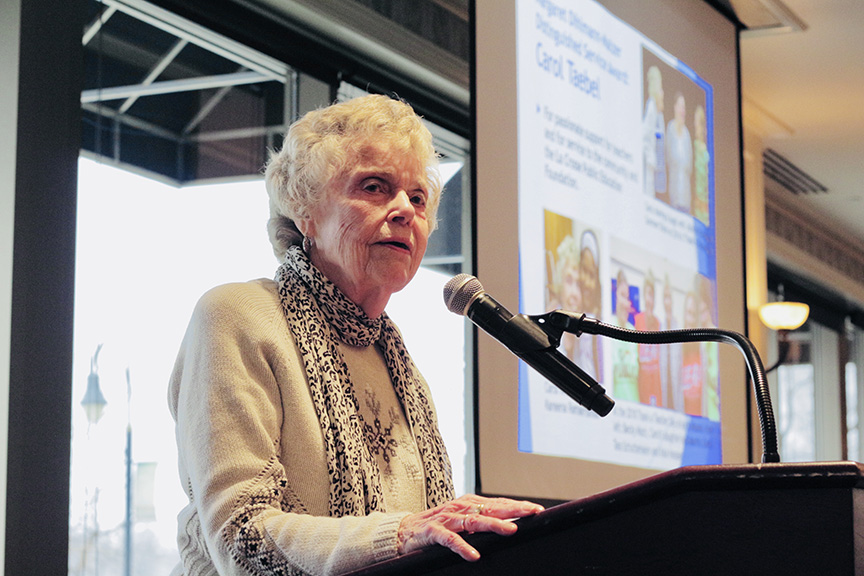 Carol Taebel told a story of receiving flowers recently from a friend and explained the card had a simple message: “Here was a bouquet from a dear friend of mine. And she had written … ‘A great teacher keeps giving’ … and that’s what I plan to do.” 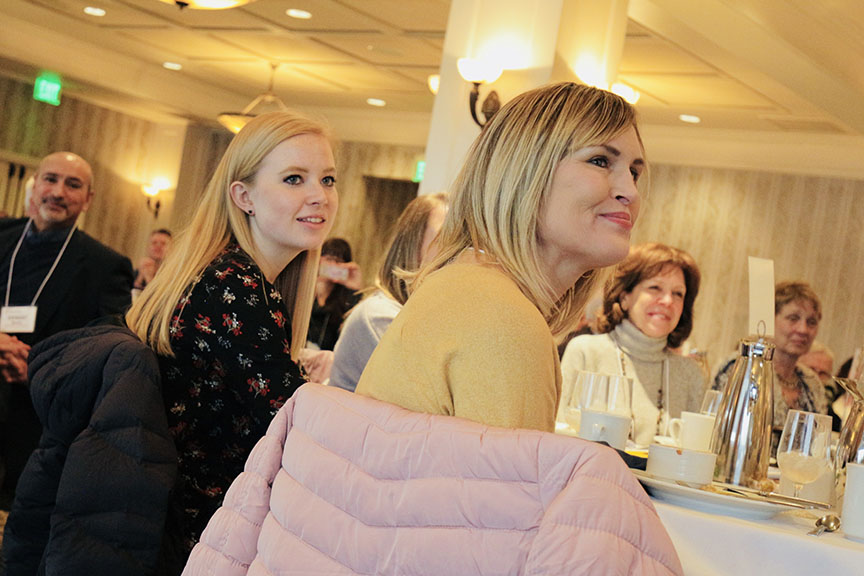 Summit teacher Carissa Brudos (front right) received a grant for a visiting artist who will work with students on an art project using molten beeswax paint. The grant was underwritten in part by Modern Crane Service. 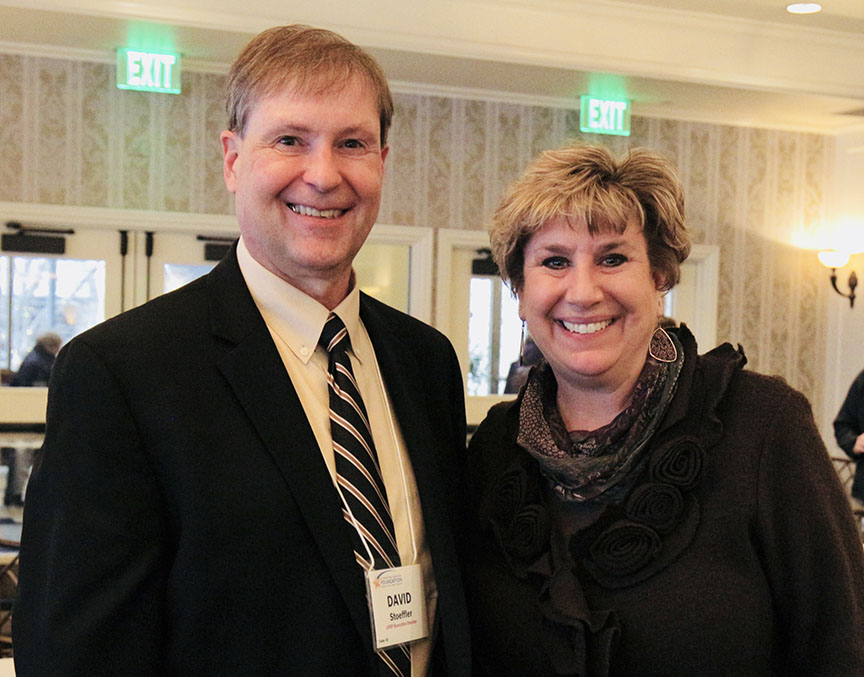 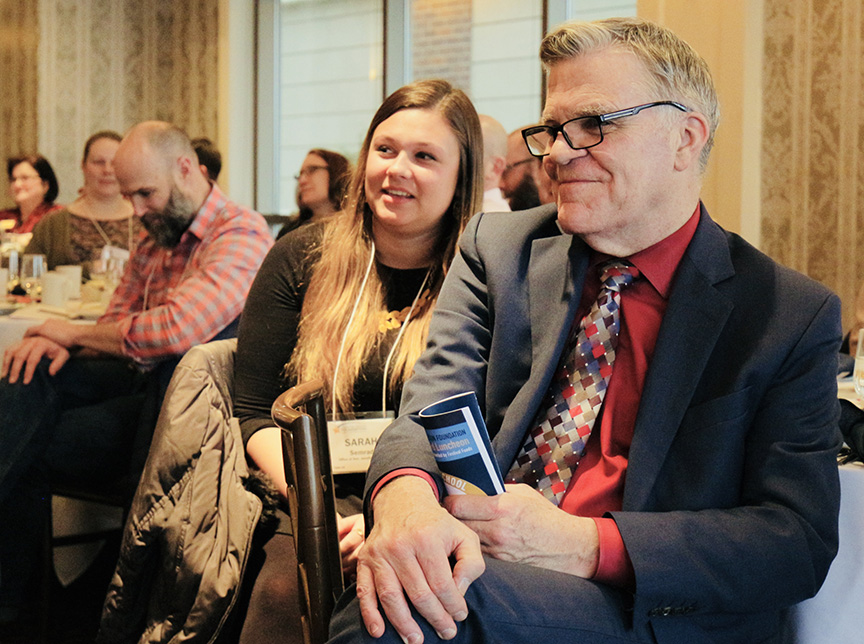 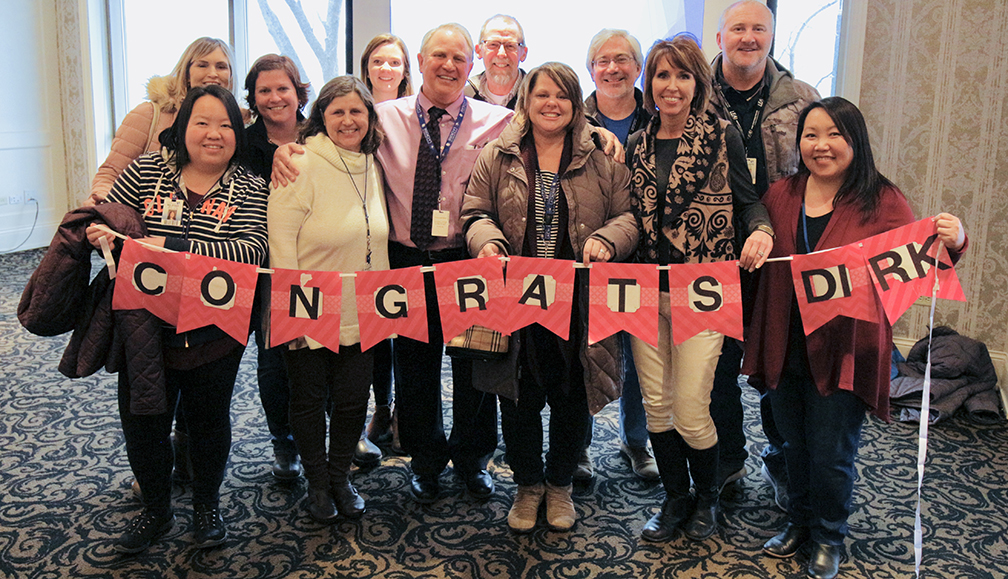 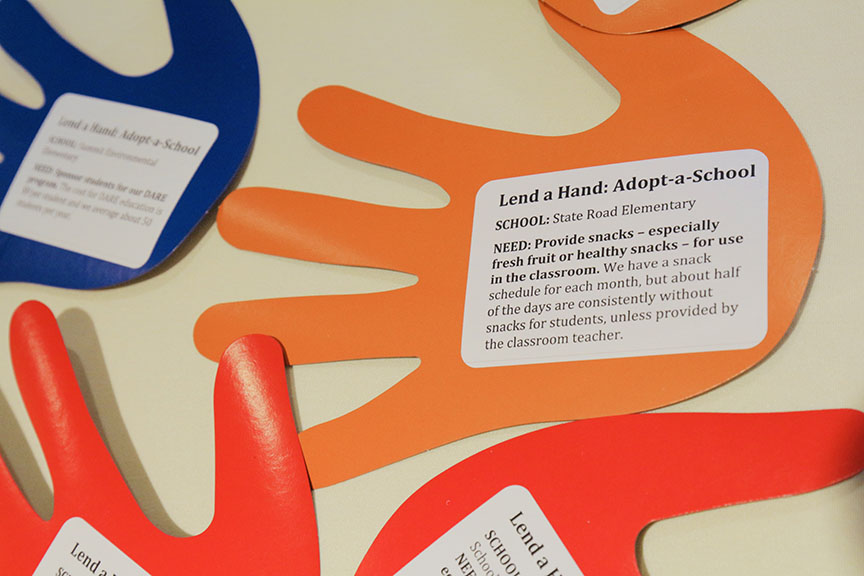 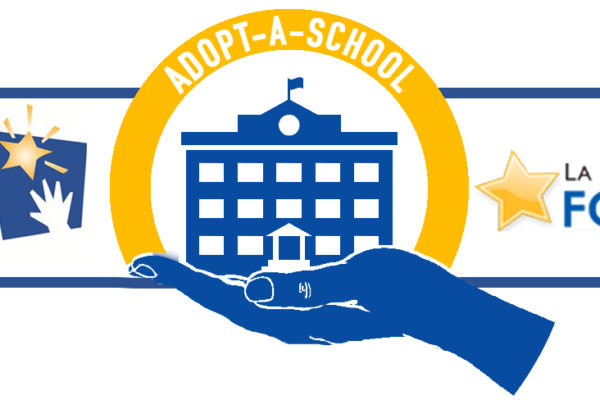