The event is a major fundraiser for the La Crosse Public Education Foundation and also honors the late Dr. Charles Miller III, a foundation co-founder and a longtime member of the Board of Education for the School District of La Crosse. Dr. Miller was a surgeon at what is now Gundersen Health System. He died unexpectedly while playing racquetball in May 2011.

With the generous support of sponsors, including the family of Dr. Miller, the event helps support the overall work of the foundation as well as generate $1,000 in prize money for immediate grants to La Crosse schools represented at the outing.

In the video above, Joe Grosskreutz, a senior at La Crosse Central High School, poses a Knowledge Open trivia question at Hole No. 18 as part of the Charlie Miller Bowtie Classic. Providing a correct answer was Saul Siegman, part of the team involving Jarena Everson, Fred Everson and Jeanette Everson, daughter of the late Dr. Charles Miller III, namesake of the golf outing.

Here are details on the winning teams: 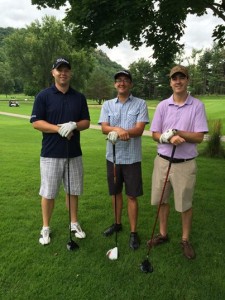 Winning $500 for the Hamilton Early Learning Center was a three-man team from Marine Credit Union: Adam Keer, Curt Greeno and Aaron Sharar. The team’s final 18-hole score was 49 after subtracting 12 points for correct answers to questions in the Knowledge Open. 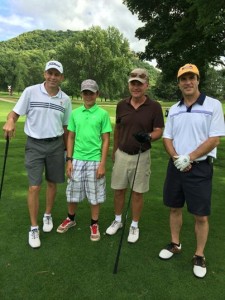 Second place – winning $250 for Longfellow Middle School – was the team of Brad Fowler, Ben Fowler, Jim Ringstrom and Tom Londergan. The team score also was 49 after subtracting 8 points for correct answers. (The tie-breaker was based on which team correctly answered the most questions.) 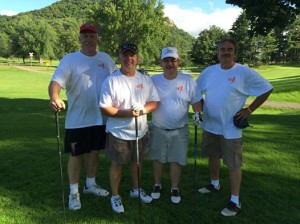 Third place, with a score of 51 (after 10 correct answers), went to the team of Dirk Hunter, Phil Curti, Phil Gredler and Bill Hoel. The team won $125 for Summit Elementary, where Hunter is principal. 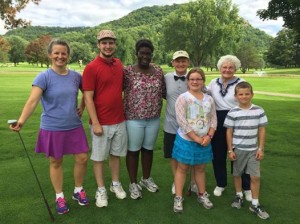 Last place, for the highest 18-hole score, went to a team representing the family of Dr. Miller. The team included his daughter, Jeanette Everson, Fred Everson, Jarena Everson and Saul Siegman. They were assisted by two other grandchildren, Daniel and Esther Everson — and were cheered on by Susan Miller, wife of the late Dr. Miller. For last place, the team won $125 for Lincoln Middle School/SOTA II. 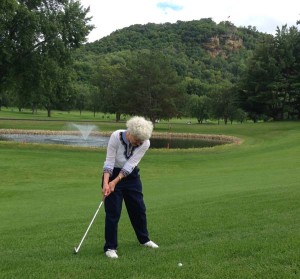 Susan Miller takes a stroke for her daughter on the approach to the 18th green, with Granddad’s Bluff in the background.

See a complete photo gallery of all the teams, plus other images from the 2014 Bowtie Classic.