Posted on September 4, 2016 Categories: Bowtie Classic Comments are off for this post

The number of golfers was a record, as was the total fundraising: a net of nearly $24,000 was raised to benefit the La Crosse Public Education Foundation. Proceeds go to support classroom grants and other important projects.

The golf outing is the largest annual fundraising event for LPEF and honors the late Dr. Charles Miller III, a foundation co-founder and a longtime member of the Board of Education for the School District of La Crosse. Dr. Miller — who was known for his signature bowties — was a surgeon at what is now Gundersen Health System. He died unexpectedly while playing racquetball in May 2011. 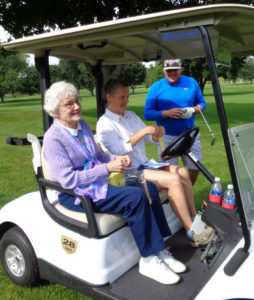 Susan Miller, wife of the late Dr. Miller, as well as their daughter Jeanie Everson, were on hand to join the festivities and also help sponsor the event. Susan and Jeanie made the rounds of the beautifully remodeled Forest Hills, selling raffle tickets and greeting golfers. The Miller Family sponsored free golf for two teams of La Crosse middle school students who played at the event.

Teams play for the benefit of schools in the School District of La Crosse, with the first-place team winning a $500 grant for a school. Second prize was $250. Third prize was $125 and the highest-scoring team also won $125 for a school.

For a complete report and photo gallery, see our section on Bowtie Classic Golf Outing and Knowledge Open.